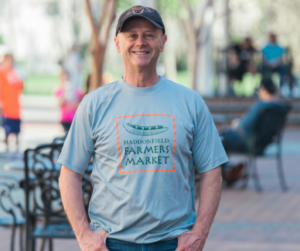 The Haddonfield Farmers’ Market is back for the 2021 season, and who better to lead it than Market Director Ralph Ciallella!

Ralph has been familiar with the area his entire life; he grew up in Cherry Hill, but when he was younger, it had yet to be called that. His grandparents were living in Haddonfield, so he’d venture over to town and spend time with them, so he’s no stranger to the area. He’s gained enough knowledge about the town to share with others, which would ultimately contribute to his role with the Haddonfield Farmers’ Market.

Ralph’s involvement with the Market began at the start 17 years ago; he was a volunteer from day one, and a year later became the Market Manager. His transition to Market Manager happened when the Market Board realized they needed someone local to fill the position. Thus, Ralph was the ideal fit; his interest in the community, farmers and the overall success of the Market would allow him to thrive in the role. He’s developed a solid understanding of the community, along with the work that farmers do.

Ralph is incredibly excited for the Market to be back this season–especially in its original location in Kings Court. In the past, Market vendors ranged from local farmers to beer and wine distributors. This year, several local farmers, food purveyors and more will be at the Market.

Ralph says that the Market will be abiding by COVID-19 rules and regulations with properly spaced vendors, a separate entrance and exit into the Market, maneuvering people in a clockwise direction throughout the space at Kings Court, and the Market board will encourage visitors to mask up.

To learn more about the Haddonfield Farmers’ Market this year, visit https://haddonfieldfarmersmarket.org/ and check us out on social media!